Your Ultimate Guide To The Russian Orloff Chicken Breed

Russian Orloff’s calm personality, winter hardiness, and active foraging may seem like a perfect fit for many homestead backyards. But are you ready to breed an endangered chicken breed? Find out what it takes to own and raise Russian Orloff.

Russian Orloff breed in a nutshell

A Brief History Of The Russian Orloff Chicken

Contrary to what their name suggests, the Russian Orloff is not really from Russia!

This breed originated in Persia (or what we know today as Iran). It was only imported to Russia by Count Alexey Grigoryevich Orlov, a.k.a Count Orloff Techesmensky, in the 1700s. Orloff soon became popular in England and Germany before eventually reaching the U.S. Unfortunately, the breed’s popularity didn’t last long. No one wanted the Russian Orloff that the American Poultry Association removed the breed from its official registry (1)

The Orloff is one of the largest chicken breeds, weighing between 6.5 -8.5 pounds. They aren’t big chunky chickens, but rather quite tall and trim.

Orloff chickens have either a rose comb or a walnut comb and heavily feathered necks with beards and muffs. This bird also has yellow-colored shanks and feet.

Between Russia, England and Germany, several color varieties collectively exist. These are Black, Black-breasted Red, Buff, Cuckoo, Mahogany, Mottled, Spangled, and White. The Spangled Russian Orloff is probably the most popular color variety, but the Mahogany is the most unique (2).

It is probably the Orloff that was the first breed to sport the solid red color.

Since the breed isn’t registered in North America anymore, having show-quality Orloffs in your backyard is rare.

Now that you know what the breed looks like, let’s dive down what it’s like to own these rare birds.

These chickens are calm and quiet, but they can make a fuss when you try to hold them in your arms. This chicken breed is also aloof, so don’t expect them to make friends with your existing flock. To introduce Orloffs, make sure to read our introducing new chickens to flock guide.

As beautiful and unique as the Orloff is, the breed’s egg production may leave you wanting more since an Orloff hen can give you 100 light brown eggs or brown eggs per year.  If you want more eggs, better choose one of the superior layers, such as the Australorp or Speckled Sussex.

Although Orloffs are dual-purpose, this breed shine as bird meat since they are big, they have more meat (3).

Orloff chicken produces a lot of fine meat especially on the breast which is not accumulated fat.

Two things to note about Orloff chicken meat: First, it is said to be flavourful but quite tough; second, it takes longer to harvest, similar to their fellow large breed cousins, the Orpingtons. Then again, some keepers say it’s worth the wait.

How To Take Care of Orloffs

A fully grown Russian Orloff is relatively easy to maintain, but you might have a problem raising this breed from eggs.

The hens are not well-known to go broody. In most cases, you may need to incubate the eggs until they hatch. But the problem doesn’t stop there.

Russian Orloff chicks are quite susceptible to diseases, probably due to the characteristic of late feathering in this breed. Besides providing good-quality feed, you will need to supplement their diet with extra vitamins and some herbs.

Despite the difficulties in the early stages,  adult Russian Orloff chickens are one of the hardiest chickens. (4)

It will take some time, but when they make it through to adulthood, they become one of the most hardy chickens out there (4).

Although a slow-growing breed, Orloffs are very hardy and resistant to harsh winter weather.

They were sought-after for this cold hardy trait, especially the hens who continued to lay eggs even in extremely cold weather.

2. Give Plenty Of Space

Being a larger chicken, the Russian Orloff needs plenty of space. If space is limited, then a large coop will do, but make sure it is a predator-proof chicken coop. These birds are already rare; you don’t want to further lessen their numbers because of a fox!

Where Can You Buy Russian Orloff Chickens?

Russian Orloff Chickens’ population dwindled ever since the APA removed the breed from their registry. They are low in numbers that the Livestock Conservancy considers them as endangered. In fact, it is very hard to find them nowadays. (5).

There are only 3 reputable breeders of true Russian Orloffs in the western region of the USA.

If you’ve decided by now that this rare breed is for you, then you can get in touch with Rare Feather Farms. They are one of the most famous breeders of Russian Orloffs in Washington. You can also check the breeder’s directory of the Russian Orloff Society USA & Canada for more sources of these rare Russian fowl.

With its lush upper body feathering, and endangered status, the Russian Orloff is an interesting breed to have. However, this breed is not for everyone because of their big coop needs and low egg production. If anything, you can have Orloff chickens for meat or for their rarity.

The Russian Orloff egg color ranges from light brown to brown. The coloration is brought about by the chicken’s genetics, not by the diet (as believed by some people). In Orloff chicken, the brown color intensity depends on how much pigment there is in the chicken’s hemoglobin. Naturally, the more pigment, the darker the color.

Russian Orloffs take around seven months to mature, meaning that pullets start to lay eggs and the bone structure and muscles of the birds are mostly well-developed. This is relatively a long time, considering some breeds maturing as early as four months, but this is common for large-sized chicken breeds. Slow-growth rate is a trait attributed to heritage chicken breeds developed before the mid-1900s.

Russian Orloffs are not friendly. They are calm, and though they tolerate other chickens, they would rather keep to themselves and avoid any contact with others. There is also debate about these birds being docile. Some keepers mention that their Orloffs are easy to handle, while others claim otherwise.

Tana grew up around island farms and pine forests. Her love for nature lead to her degree in Biology and mission to lessen her environmental impact. Now she grows food in her backyard and shares what she learns from Eco Peanut with others. 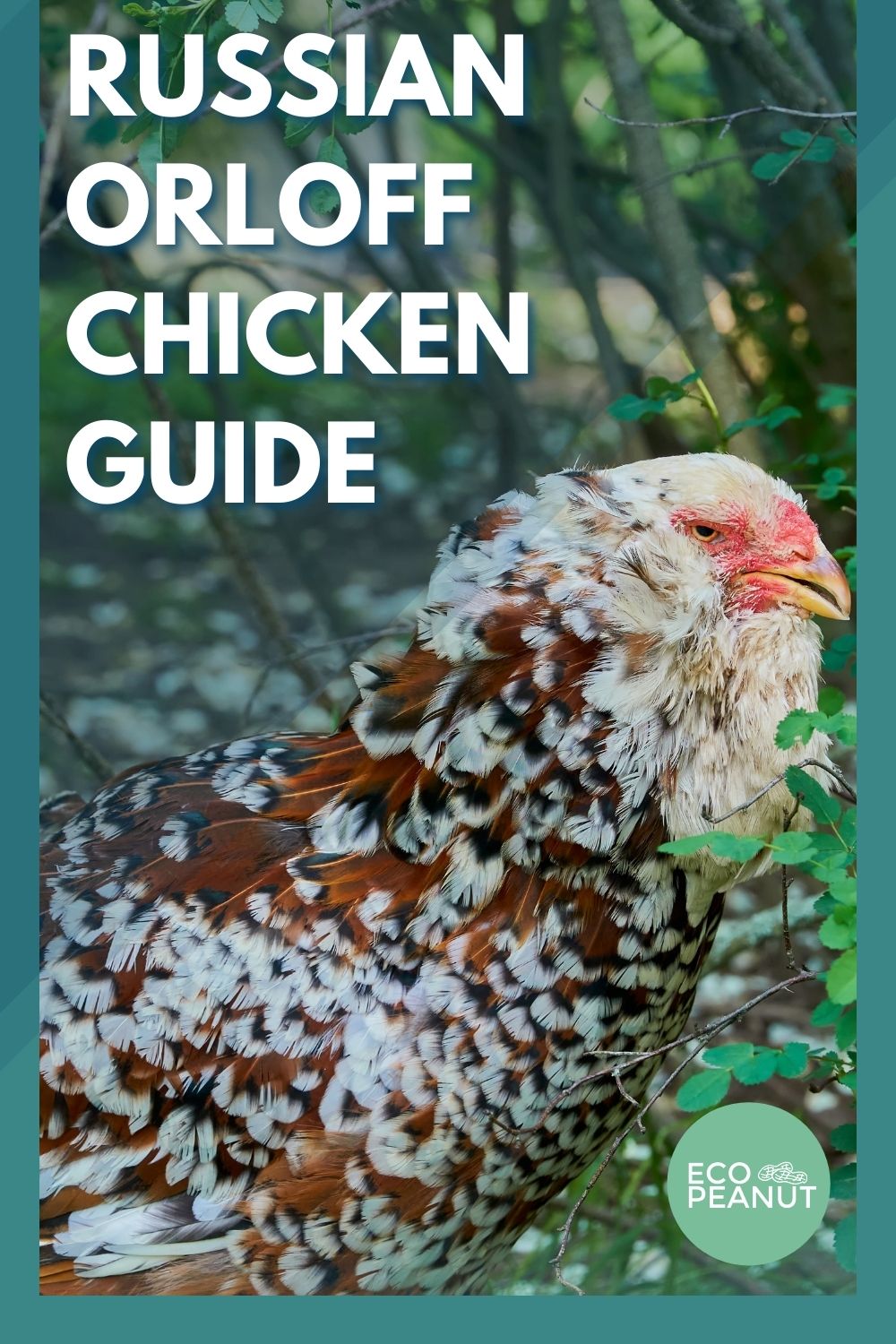