5 Reasons You Should Grow Cosmos Flowers ( + Tips Guaranteed To Inspire)

Powerful in a delicate way, this plant is certainly an example of how looks can be deceiving, which is perhaps the reason why it has won the hearts of so many gardening enthusiasts around the world.

If you’re curious about the cosmos, let us walk you through the technicalities of their beautifully hued universe.

What Do Cosmos Flowers Look Like? The 2 Most Popular Species of Cosmos

Cosmos flowers belong to the Cosmos genus and to the Asteraceae family, and are native to tropical areas of the American continents. Although approximately 40 different species have currently been identified, it is the Cosmos sulphureus and the Cosmos bipinnatus which are used most often by gardeners.

Popular varieties include the Bright Lights, Cosmic Orange, and Lemon Twist. Other, less common, varieties include the Cosmic Red, Cosmic Yellow, and Ladybird Dwarf Gold. The Cosmos bipinnatus – a.k.a. Mexican Aster or Sensation Cosmos – is characterized by its daisy-like appearance, finely cut foliage, and pastel flowers that grow from 2 to 3 inches in width. Like the Cosmos sulphureus, early blooming varieties of Cosmos bipinnatus will appear in summer, while late blooming varieties will appear in fall.

The actual colors and height will depend on the variety in question.

You can use the list below as a reference for a few varieties:

For these two species of cosmos flowers, leaves are either pinnate or bi-pinnate.

In pinnately compound leaves, a row of leaflets forms on either side of the rachis, which is the leaves’ main stem.

Where To Buy Cosmos Flower Seeds

Why do we specifically recommend organic heirloom seeds?Well, with the invasion of hybrid and Genetically Modified Organism (GMO) seeds in the marketplace, heirloom seeds have never had such relevance when it comes to preserving the genetic diversity of this planet.

The term heirloom applies to all of those fruits, flowers and vegetables that are considered “old-time varieties”.

Unlike hybrids and GMOs, heirloom seeds can be collected and saved year after year and will consistently resemble their parent plants, while continuing to adapt to the ever-changing environmental conditions in which they grow.

Who knows more about seed production than nature itself? That’s why we recommend heirloom seeds over the alternatives. Feel free to continue reading about why you should grow heirloom seeds in EcoWatch’s article on the topic.

Extra Cosmos Flower Facts – Answers To The Most FAQs

Depending on their corresponding life cycle, plants can be classified as Annual, Biennial, Perennial, or Ephemeral.

Both the Cosmos sulphureus and Cosmos bipinnatus species of cosmos flowers are considered annual plants. This means that their entire life cycle of germination, production of seeds, and death is concluded in a year’s time.

Therefore, if you’ve been asking yourself “do cosmos come back every year?” the answer is no.

What are the medicinal uses of cosmos flowers?

Although the Western world has adopted this flower mostly for ornamental purposes, cosmos were used in Central and South America as a source of natural yellow and orange dyes, as well as a medicinal plant.

In Brazil and Mexico, for instance, the plant has been traditionally used for treating malaria.

Some species of cosmos are also known to contain anti-inflammatory and antioxidant properties.

What do cosmos seeds look like, and when should I harvest them?

Once the cosmos flower heads have dried out and the petals have fallen off, you’ll see that the small, thin and elongated seeds are still attached to what’s left of the flower heads.

If the seeds are still green in color you should wait until they are brown to harvest.

For a detailed explanation, watch Dave’s Subtropical Garden’s short video on how and when to harvest cosmos seeds.

Can you grow cosmos flowers anywhere in the world?

If your inspiration for planting flowers is to make a positive impact on the environment, the answer to this question is no.

It is not recommended to plant cosmos flowers all over the globe.

It is, however, recommended for those living in regions in which cosmos flowers naturally occur – in other words, tropical American countries.Why is this?This is because native plants are the base for supporting other local flora and fauna, such as insects and birds. This helps maintain a healthy ecosystem.

When an exotic species is introduced it not only damages the local food chain, but it may become a pest that outcompetes native species and weakens habitats as a result.

It is, therefore, always suggested that gardeners plant local species rather than foreign ones. You can learn more about this subject by reading Audubon’s article on Why Native Plants Matter.

If you thought that adjectives such as “provider”, “sturdy”, “boundless”, and “enduring” could never be paired with the word “flower”… you may want to think twice.

Cosmos haven’t gained their popularity for no reason. In fact, there’s a lot more to these lovely flowers than meets the eye, and that’s why we’ve taken time to summarize their most outstanding qualities below.

If planted in a location where this plant naturally grows – that is, in tropical areas of the American continent – cosmos will end up attracting and sustaining local fauna in addition to playing their specific role in their respective ecosystem. Like Go Native explains, growing native plant species encourages developed landscapes to coexist and to eventually become part of the local ecosystem, instead of competing with it.

Choosing to house native plants in your garden will also allow you to say your farewells to chemical pesticides and fertilizers, as these are made to resist local threats and thrive in local conditions. In case the cosmos isn’t native to your location, go ahead and use NWF’s Native Plant Finder to find splendid local species!

These pretty flowers are as hardy as a flower can get.

In fact, they prosper best in poor soils that have little to no fertilizer or mulch, and are even sturdy enough to withstand droughts. Depending on where you are, however, cosmos may (or may not) be threatened by pests and/ or diseases.

You may want to watch out for stem canker, powdery mildew, gray mold, and aphids.

Remember that, when necessary, these can always be treated organically without the need for chemical pesticides or fungicides.

If you buy organic heirloom seeds instead of hybrids, you can collect seeds when they’re ready for harvest and save them for the next planting cycle.

No need to buy seeds over and over again! Keep in mind that there are several factors that will allow you to keep collected seeds stored away healthy and alive, and perhaps the most important ones are moisture and temperature.

Ideally, you should keep those cosmos seeds in a dry place where the temperature remains either moderate or cold, as this will help avoid fungi and bacteria growth as well as insect infestation.

When you allow cosmos flowers to complete their life cycle and die out naturally, their seeds will fall onto the soil and germinate effortlessly. Sunflowers, Sweet Peas, Aquilegia, Marigold, and Pansies are amongst other flowers that also germinate and grow with ease.

Once the kaleidoscopic cosmos decide to bloom they will go on blooming for months, providing a prolonged spectacle of wonderful tinges and pigments.

You can expect these flashy flowers to show off from the moment of the first bloom until the first frost. Some annuals that show similar prolonged blooms are the Flying Colors Coral Diascia, Rudbeckia Prairie Sun, Royal Velvet Supertunia, and Nasturtium.

Find more in HGTV’s list on 17 Annual Flowers for Year Round Color.

How to Grow Cosmos So They Will Thrive

Words of advice before getting your hands dirty

Don’t bother preparing the soil or adding mulch or fertilizer. Remember, these flowers are uncomplicated, so choose loamy soil!

2. Housing cosmos seeds – When to plant?

3. Find the ideal location – Where to plant?

Plant cosmos in a place where they will receive full sunlight, or about 6 to 8 hours of direct sun per day, and in a location where they are protected from harsh winds.

(You could even plant cosmos flowers in your urban environment – balconies, vertical gardens, and even tower gardens may be an option worth considering if you lack space)

You can expect the first bloom to occur 7 weeks from the time of planting.

3 Tips for Caring for the Cosmos

Take care not to overwater

Cosmos are solid, drought-friendly plants, so water them only if the soil has been completely dry for a couple of weeks. Just like over-fertilizing, over-watering will result in fewer flowers.

Note: For those curious about rain harvesting (a great way to collect water for your flowers!), take a look at our article on Best Rain Barrel Systems for Smaller Home.

Remove dead flowers from the plant. This will allow new, healthy flowers to develop.

Support with a stake

Stake your cosmos by placing a stick next to each plant and securing all stems with a thin rope.

You can avoid having to do this by planting these flowers in a spot where there’s little to no harsh winds.

If you’re still unsure of whether planting cosmos flowers is for you, just answer one key question: Why do you want to plant flowers in the first place?

Is it for ornamental reasons only? Is it to make a positive impact on the environment? Is it for fun?

The answer to this question will lead you to the cosmos or perhaps another lovely flower out there!

But remember, if your aim is to make a positive impact on the environment, it is best to find a plant that is native to your location in order to support local flora and fauna. We hope this article satisfied your cosmic curiosity. If it did, remember to leave your flowery thoughts, opinions, or concerns in the comment section below and to spread all cosmic colors by sharing this article with friends and family. 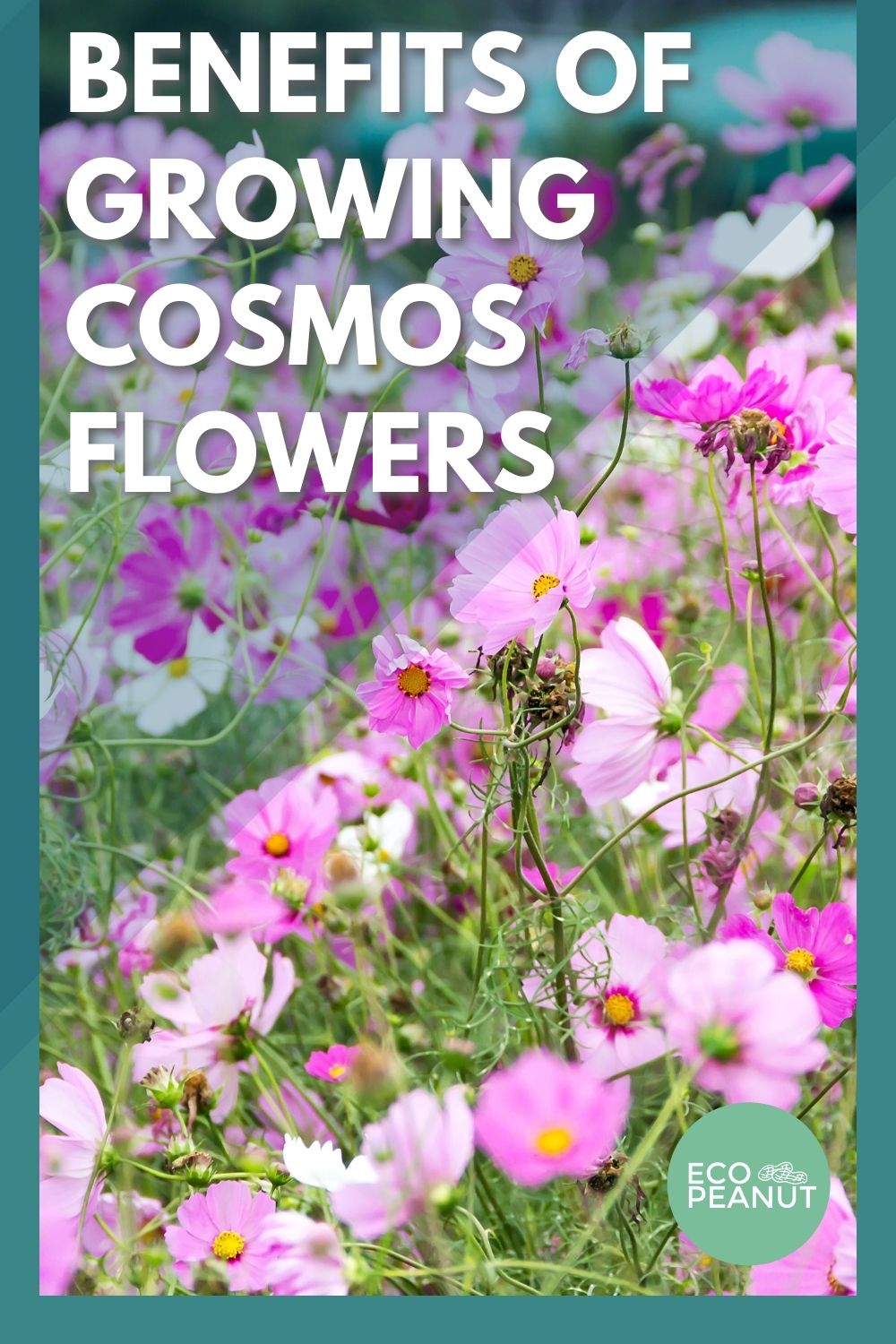