How Do Chickens Mate? Do You Need A Rooster?

The mating process of chickens is different from that of other animals. They even have a mating ritual to win the hearts of the girls. So, how do chickens mate? Let’s break down everything you need to know.

The Birds And The Bees Of Farm Fowl – How Do Chickens Breed?

So, how do chickens mate? Let’s break down everything you need to know.

How Do Roosters Court The Hens?

Before chickens mate (or get down and dirty), they do some courting first, and no, roosters don’t give a bouquet of flowers or a box of chocolate – chocolates are deadly to chickens, by the way!

A rooster woos a hen with a chicken mating dance. Think of it as a seductive salsa with a hint of “tag, you’re it”thrown in the mix! Some males even flap their wings to show-off! (This is called wing drag)

We’re not even kidding. Just check how this rooster is sprinting around the hen with wings extended downwards.

Sure, it’s not the most romantic gesture, but we have to give props to the rooster for trying this wooing tactic. But some males do make a sweet, long-lasting impression called tid-bitting. A male will find a tasty treat and offer the appetizing snack to the apple of his eyes – aww!

Don’t be surprised if a rooster is two-timing a hen! Backyard chickens are polygamous and hens don’t mind this kind of relationship status.

This chicken mating behavior may not give you grandkids aka baby chicks ASAP, but your hen will remember your rooster next time they cross paths. It’s like a Hollywood romantic movie, isn’t it?

These two rooster courtship strategies can win the hearts of the ladies, however, there are many roosters who will get heartbroken. But don’t worry, your roosters won’t go sad and crazy over the rejection. Things will go on as they did before the courting began.

Chicken Mating: How Do Chickens Reproduce?

But what if the yummy treat or the dance actually worked?

Your backyard hens are now ready to start making their baby chick, well, fertilized eggs that is. Now, it is not going to be like 50 Shades of Grey. When you witness chickens mating, there’s going to be a lot of tension, especially with the mating position.

The climactic event takes place with the hen squatting on the ground. The rooster mounts the hen and tries to find his balance by using his beak to grasp the top of her head, neck, or – in some cases – comb.

Once the rooster has found some stability, they proceed to press their cloacae against each other; an act known as the cloacal kiss. Does this mean that roosters do not have penises? Can a rooster fertilize the egg?

Correct – like countless other birds – roosters do not have penises. The body part responsible for releasing sperm is a slight bump named a papilla that is found within his cloaca (1).

In the male chicken, as with other birds, the testes produce sperm, and then the sperm travels through a vas deferens to the cloaca.

After the reproductive act has occurred the hen will get up, shake those feathers, and carry on with her daily duties…

At What Age Do Chickens Mate? When Is A Rooster Ready To Mate?

By 6 months, hens have reached their sexual maturity and ready to mate. As for the boys, it can be around 5 to 6 months. This is an average, though, as there are breeds that will take as long as 8 to 10 months to be ready to procreate.

When Do Chickens Mate? The Chicken Reproductive Cycle

Although reproductive behavior noticeably boosts in springtime, mating between chickens is pretty much a year-round activity. You may be surprised to learn that one rooster may mate between 10 to 30 times a day! Why?

Well, in the chicken realm, the mating process is not solely associated with reproduction; these birds also mate to establish hierarchy.

Therefore, be careful if you have multiple roosters since they tend to compete for the same hen by either fighting against each other or by continuously mating with her. Don’t keep young male chicks in the chicken coop too!

In serious cases, the latter may lead to missing feathers on the hens’ backs, necks, or heads… and in the worst of cases, deep mortal wounds.

Some chicken keepers opt for using a hen saddle to protect a hen’ back from injuries.

We instead suggest either keep a proper ratio of hens to roosters (10 to 12 hens per 1 rooster) or to simply separate them.

Do chickens mate for life?

No, chickens do not pair for life. Roosters usually mate with multiple hens, and hens may also mate with more than one rooster.

Chickens cannot reproduce without a hen and rooster playing their respective roles; the same way a human baby cannot be formed unless an egg and sperm join together.

However, it doesn’t mean a hen won’t lay eggs. A hens’ egg production is not triggered by a rooster, but by her brain’s pineal gland which in turn is spurred by light.

So you can therefore have hens that lay eggs even without a rooster. If you want a baby chick or breed chickens, you’ll need a rooster.

Wondering how long do chickens lay? Our article on the subject will help answer your questions.

In a nutshell, chickens are quite sexually active creatures that, instead of procreating via an act of penetration, do so by touching their cloacae together.

This activity, however, is not exclusively linked to reproduction; it plays a critical role in their hierarchical structures and is often used by the alpha male to establish dominance over competing roosters.

We hope this article answered how do chickens mate and learned more about chickens mating. Remember to share your thoughts and ideas in the comments section below!

You can know if a rooster has fertilized an egg through candling. To do this, simply hold-up an egg to a lit candle. The light will shine through and let you see the contents without breaking the egg. If the shell is opaque, you have fertilized eggs. If you don’t have a candle, Some backyard chicken owners use a high-lumens flashlight and a candling box. You can also use your smartphone’s flashlight, but make sure that the light goes only to the egg itself. You can use a lump of clay and make a dome around the flashlight to prevent the light from escaping.

When you’re attempting to find out if the egg is fertilized or not, do the candling process in a dim or completely dark room.

No, roosters don’t hurt hens when mating. In some cases, due to the awkward position, a rooster will hold down a female’s neck feathers or comb to steady or balance himself. Although not deadly, it may cause some mini injury. Many chicken owners use a chicken saddle to make the mating comfortable, safe, and pain-free for female chickens.

Some roosters, however, are aggressive when mating because of the lack of hens in your flock.

Ideally, you should have 10 hens per one rooster. If you notice that your hen has some bald spots and even has open wounds around the neck area, you should consider adding more female chickens. Also, consider the age of your rooster. Young male chickens have more energy to mate.

If you don’t want to have more chickens to care for, you may want to cull the rooster. If killing is not an option, make a separate bachelor pen for the rooster and never let him go near the females again.

No, it doesn’t matter if chickens inbred provided that it is only for the short term. Extended inbreeding can lead to loss of fertility and some chickens won’t lay eggs at all. Remember, inbreeding doesn’t only heighten the positive trait, but also the negative gene.

If you want to reduce the chances of inbreeding problems, you should have two roosters. Some chicken keepers have one from the flock, and the other from a completely different bloodline. If you don’t have roosters yet, you can get the males from two different hatcheries just to be safe.

Your rooster is not mating because he is probably way too young. As mentioned, some roosters are ready to mate when they are about five to six months. However, some breeds may take as long as 10 months (even more) to show any interest in procreating. Also, adult females usually ignore the youngsters when they attempt to make a move.

There are some cases that males do not mate because the hens are big for them to saddle on. If that’s the case, consider getting a smaller hen breed. Another reason why your male chicken is not mating is that you have a more dominant rooster in the flock. When this happens, the dominant roo will attack and protect the hens. If you want to give your boy a fighting chance, keep the more dominant male inside the coop while he tries his luck with the ladies.

Alex lives in the sustainability capital of Australia (Byron Bay) where the local community thrives and strongly supports self-sufficient living and green tech entrepreneurship. He began Eco Peanut in 2014 with the mission to spread bite sized sustainability advice to the masses. 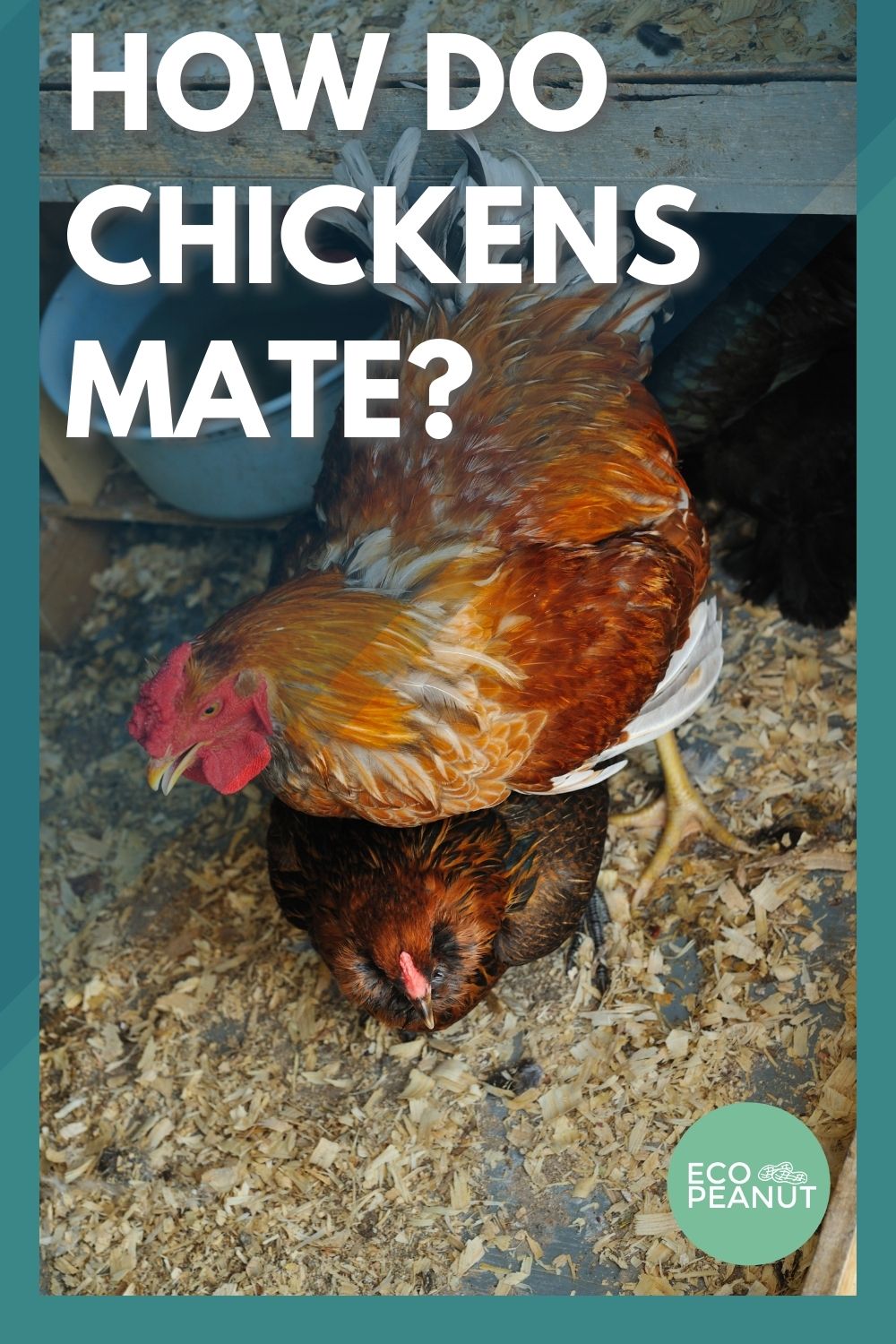